Thrive’s Food Security Action Team is tasked with improving access to nutritious food for the estimated 7,000 school-age children in our area whose families are food insecure.

Despite dozens of government and local charitable food programs, many children still go to bed hungry.

Unlike the system that brings tap water to your sink, social service delivery systems are difficult to fix. Water supply pipelines are built by design. When water doesn’t flow, engineers review the plan, target the likely point of a break, and start fixing.

No one designed the charitable food distribution system in Sioux Falls. It evolved.

Each generous program was created to fill an important need. Each program set its own rules for how it runs. And though the programs inevitably overlap, each is a system unto itself.

Dan Heath, best-selling author of the book “Upstream,” says that fixing a complex system begins by figuring out where to start. One needs to find a problem that can be leveraged, a point in the system where change can payoff. To find a viable leverage point, he advises the upstream thinker and doer to “immerse yourself in the problem.”

A point of leverage for the hungry 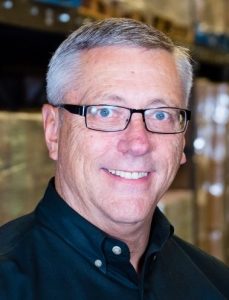 A point of leverage. That’s what Matt Gassen, Feeding South Dakota CEO, was looking for when he approached Thrive about immersing itself in the charitable food distribution system.

So, we did. The result was an Augustana Research Institute study that identified our city’s food deserts, the patchwork of programs trying to alleviate hunger, and the barriers families must overcome to get the food they need.

Immersion in Augie’s data led to an unexpected insight. Maybe past collaborations had failed because the scope of the problem was too big? Perhaps the system could be leveraged if Thrive fixed food distribution for one neighborhood at a time?

With the food team’s blessing, food security emerged as the key strategy for Thrive’s Kid Link Riverside Initiative. Gassen was all in.

Feeding South Dakota’s leaders were already working in Rapid City to decentralize food distribution. Collaborating with other groups to get food into the Riverside neighborhood in Sioux Falls would be another test of their “don’t make people come to us, let’s get the food to them” strategy.

Gassen says he thinks immersing the team in the problem paid off. “The light bulb went on when we realized that to get the ball rolling on system change, we had to think smaller, not bigger,” he says.

Kid Link volunteers have been meeting virtually since April, but, “There are already neighborhood groups volunteering space for food distribution in Riverside. And this month, Nightwatch food ministry will start delivering meals to the neighborhood every other week,” Gassen says.

Stephanie Peterson, owner of Fruit of the Coop, agrees with the neighborhood approach. But she has a different perspective. From the day she attended her first Food Security team meeting, Peterson wanted to understand food needs through the eyes of the people who are served. 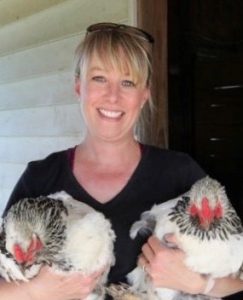 Stephanie Peterson, owner of Fruit of the Coop, holds Salt and Pepper.

“Immersing ourselves in the Riverside neighborhood doesn’t mean ‘doing things for the community’,” Peterson says. “This is a time for silence, for listening and not making assumptions. We’re working bottom up to involve the Riverside community in finding solutions to struggles they may face.”

We think Dan Heath would concur. Coming alongside the people who are serving and those who benefit from a system is another step in affecting system change.

Peterson is a sustainable food advocate, naturally drawn to the first phase of Kid Link Riverside. She knows that the work will uncover many other neighborhood needs. She believes Thrive’s determination to engage the community is spot-on.

Kid Link Riverside volunteers reach out to local families every Monday evening. “It’s important to me to show up each and every week and meet community members. I’m inspired and encouraged by the common values we share,” she says. “People power is invaluable, and the collective power within this neighborhood is the real lever to changing the system.”